​Unlike other healthcare and life science hubs, BioDundee offers a truly open and accessible network to help aspiring companies develop and test products from concept to launch. With our world-class research facilities, strong health and life sciences partnerships and access to relevant skills and facilities - we provide exceptional value and new opportunities. 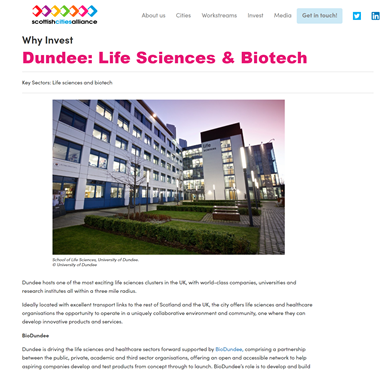 Find out what some members of the BioDundee community think of Dundee by reading their case study:

Dundee is embracing a huge transformation and has been firmly propelled to a city of global renown. Perceptions are changing and with significant investment, has come significant return. The city has excellent prospects for business investment and a highly advantageous environment for enterprise to grow. The city is embracing its enormous potential and is undergoing an ambitious period of change - with the Waterfront regeneration as a catalyst, Dundee's future has never looked more positive.

THE THIRD-LARGEST REGENERATION PROJECT IN THE UK -  The £1bn, 30-year Dundee Waterfront Development

V&A, DUNDEE - The only design museum in the UK outside London

ONE OF THE HIGHEST STUDENT:POPULATION RATIOS IN THE UK - At 1:5, with 50,000 people studying within 30 minutes of the city

These are just some of the reasons, to find out more about Dundee click here.