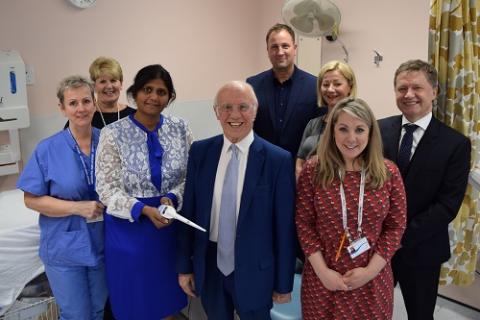 Specialist scanning equipment has been donated to Ninewells Hospital on behalf of the Michelle Henderson Cervical Cancer Trust.

Former Scotland football international Willie Henderson visited Ninewells Hospital to donate the ZedScan device on behalf of the charity. The Trust was set up by Mr Henderson’s daughter Michelle who bravely fought the disease before sadly passing away when she was 28-years-old.

Willie is now continuing his daughter’s inspiring legacy to raise money and awareness about the importance of cervical screening.

Willie said he was proud that the Michelle Henderson Cervical Cancer Trust is helping others.

He said, “Michelle set up the Trust to give back to those who had helped her during her treatment. She also wanted to raise awareness of the condition and in turn raise funds towards hospital equipment, medicines and support groups for women suffering from the illness.

“It’s amazing to think that even when Michelle was battling illness, she was still thinking of other people and how she could help. We are proud to keep this work going and it is great to be able to help hospitals like Ninewells help women.”

He said, “We have been involved in a lot of fundraising and some of the women I have spoken to have told me they are embarrassed to get their cervical smear. I tell them that embarrassment won’t kill you, but cervical cancer might – it is so important for women to go for their screening.”

Lead colposcopist Dr Kalpana Ragupathy said, “On behalf of the Tayside colposcopy team I would like to thank Mr Henderson for his enormous generosity in allowing us to acquire this equipment in memory of his daughter Michelle.

“The ZedScan device has the potential to more accurately identify women who need treatment in the colposcopy clinic. This means that women with nothing to worry about can be discharged sooner and those who have pre-cancerous changes can be picked up and treated earlier.”

Gynaecology cancer lead Dr Wendy McMullen added, “It is essential we are able to embrace the latest technological advances in screening, especially as we are now screening young women who have been immunized against the human papilloma (HPV) virus and will soon be using HPV testing as part of the screening programme.

“We very much hope this potentially groundbreaking equipment will allow us to deliver the very best standard of care to women in Tayside.”

• Talk to your nurse or GP