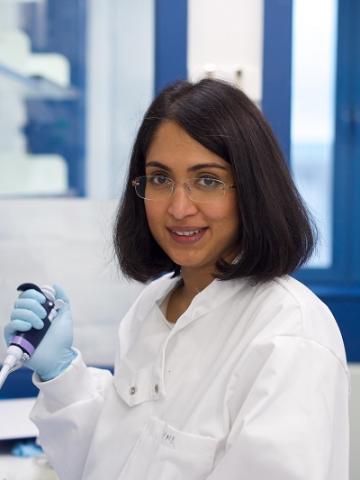 Researchers at the University of Dundee have identified a new treatment target for coeliac disease that could relieve inflammation and unlock alternative treatment options.

At least 1 in 100 people in the UK are estimated to have the gluten-driven autoimmune disorder, coeliac disease. The only treatment for coeliac disease is a life-long gluten-free diet, and there is an unmet clinical need for alternative treatment options.

A lab team led by Dr Mahima Swamy in the School of Life Sciences has investigated how IL-15 leads to activation of intestinal immune cells and identified PIM Kinases as potential targets to reduce inflammatory responses.

In coeliac disease and other inflammatory bowel diseases, IL-15 is overproduced, leading to extensive damage of the gut wall.

The studies have revealed that IL-15 not only triggers cytotoxic activity in intestinal immune cells, but that it also directly regulates their proliferation, protein synthesis, metabolism, and immunomodulatory molecules expression.

Olivia James, first author on the paper and postgraduate researcher in the School of Life Sciences said, “In patients with coeliac disease both the levels of IL-15 and the numbers of IEL, a type of T-cell, are increased in the small intestine, leading to T cell-mediated damage of the intestinal lining.

“We wanted to understand how high levels of IL-15 might trigger the IEL to damage the intestinal tissue.

“These are exciting results as uncovering the mechanisms by which IL-15 leads to T cell-mediated damage in the small intestine is instrumental in treating coeliac disease.

“While we are still exploring the mechanisms of PIM kinases in IEL however, PIM kinase inhibitors are in phase I clinical trials and in the future could be used to treat coeliac disease patients by limiting IEL numbers and subsequent damage to the small intestine.”

The research was funded by the Wellcome Trust and has been published in Nature Communications.