MMV Project of the Year Award for Dundee researchers 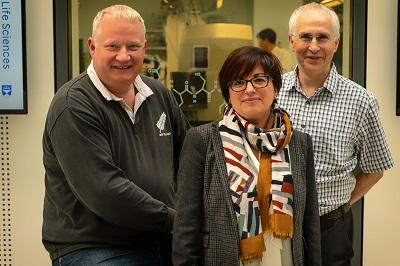 Researchers from the Drug Discovery Unit at the University of Dundee have been awarded the “Project of the Year 2018” from Medicines for Malaria Venture (MMV) for their discovery work on potential new drugs for malaria.

The annual award goes to the scientific partners involved in that year’s most exciting project from the MMV portfolio. MMV is the world’s leading product development partnership (PDP) for discovering and developing new effective and affordable medicines to treat malaria.

Malaria is a serious disease, particularly affecting sub-Saharan Africa, causing approximately 435,000 deaths in 2017, mainly amongst children under the age of 5. It is caused by a single-celled parasite.

There is a need for new drugs to prevent and treat malaria, due in particular to the rise of resistance to existing drugs, as well as the need for simpler dosing regimens that facilitate improved treatment adherence. New medicines able to stop malaria transmission and prevent malaria relapse are also required for the drive to eliminate this terrible disease.

The team at the Drug Discovery Unit, led by Professor Ian Gilbert, Professor Kevin Read and Dr Beatriz Baragaña, is working on a way to stop the malaria parasite making its own proteins, which is an effective way to kill the parasite.

To do this, the team are developing compounds to inhibit an enzyme involved in protein synthesis.

Professor Gilbert said, “This is an exciting project, using information about the structure of the enzyme and computational chemistry to design potential new drugs. Whilst there is still a long way to go and many hurdles to overcome, the team has made great progress over the last year.”

“The Dundee team was awarded MMV Project of the Year 2018 as their work with MMV really represents a step forward from business-as-usual drug discovery,” said Dr Timothy Wells, MMV’s Chief Scientific Officer. “Having a greater understanding of the structure of the drug target has been like shining a bright light on the work to optimise the drug series – it means we can be really precise as we improve the selectivity and potency of the compounds.”

Some of the background to this work has recently been published in the Proceedings of the National Academy of Sciences (doi: 10.1073/pnas.1814685116).

The award was presented to the team at a meeting of MMV’s Expert Scientific Advisory Committee in Madrid.