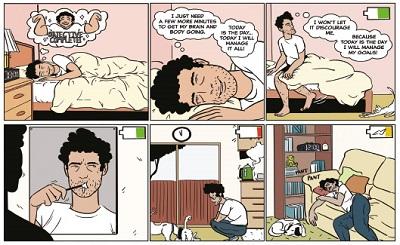 University of Dundee comics that aim to raise awareness of common but poorly understood medical conditions have received the backing of a former European leader.

Marie-Louise Coleiro Preca, President Emerita of Malta, will this week help launch English and Maltese language versions of ‘Living with Myalgic Encephalomyelitis: An Invisible Disability’, a new comic focussing on people’s experiences of living with ME. She will also launch a Maltese version of ‘Fibromyalgia and Us: Living with Fibromyalgia’, which has been helping to highlight the issues faced by patients since it was first published five years ago.

The launch will take place to mark International Fibromyalgia and ME Day on Thursday 12 May.

The new publication has been developed by Dundee academics in partnership with international comic artists, people with lived experiences of the disease, and the ME, CFS & Fibromyalgia Alliance (Malta) organisation. The purpose of this comic is to raise awareness of ME and the impact of this invisible but severely disabling condition.

ME is estimated to affect around 0.2-0.4% of the population. It is a long-term condition with a wide range of symptoms, the most common being extreme fatigue, and can affect people differently. The comic captures these aspects through four narratives presented in a comic form and one as a poem, along with a fact sheet provided by the UK-based ME Association.

Fibromyalgia and ME are two of the issues that Ms Coleiro Preca has campaigned on since leaving office and she will endorse the comic as part of a high-profile launch in Malta on Thursday. The connection with Dundee was initiated last year by Professor John Baldacchino, a Maltese researcher who formerly worked at the University and who recognised the shared interest in raising awareness of these conditions.

Since then, Ms Coleiro Preca and Divya Jindal-Snape, Professor of Education, Inclusion and Life Transitions at the University, have collaborated on an awareness raising campaign for both fibromyalgia and ME alongside Scottish and Maltese NGOs.

Professor Jindal-Snape said, “I would like to thank Her Excellency Marie Louise Coleiro-Preca, without whom this project would not have been possible. She is not only the main inspiration for this project, but also the person who brought together a team of people dedicated to this cause. Her campaigns for Fibromyalgia and ME awareness are a source of inspiration to us all.

“As someone with fibromyalgia myself, I am aware of the lack of understanding of these conditions. This comic has been vital in giving a voice to others like myself through the visualisation of the condition and its impact on people and families.”

‘Fibromyalgia and Us’ has been downloaded more than 15,000 times since it was published in December 2017. A Spanish version of the comic followed two years later.

The original fibromyalgia comic explores the long-term condition which can often cause intense pain and/or fatigue all over the body and the impact it can have on individual patients and their families. It is part of a series of public education comics created by writers and artists at the University to raise awareness of a range of conditions and issues including heart disease, coeliac disease, bereavement and grief, and organ donation.

“I show my appreciation to Professor Jindal-Snape for the synergy she created and for sharing her expertise in all aspects of developing the comic.

“This is just the beginning of a fruitful and sustainable collaboration that will raise awareness of all the invisible disabilities, not only among people living with these conditions, but also their families, carers, professionals in the field, and policymakers, in Malta, Europe and beyond.”

The English and Maltese versions of the new ME comic can be downloaded from the University website, as can all versions of Fibromyalgia and Us.