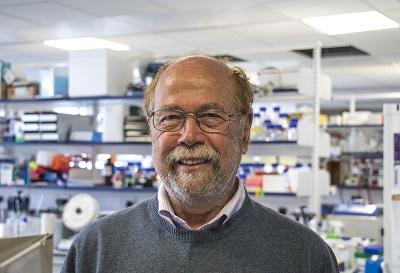 Professor Roland Wolf, of the University of Dundee, has been awarded a major international prize recognising his outstanding research impact for over forty years.

Professor Wolf will receive the R.T. Williams Distinguished Scientific Achievement Award from the International Society for the Study of Xenobiotics (ISSX) at their meeting in Portland, Oregon, at the end of July.

The prize has been awarded in recognition of Professor Wolf’s record of substantial and seminal scientific contributions to the field of drug metabolism and toxicology  over a sustained period.

Professor Wolf said, “I am delighted and honoured to be the recipient of this prestigious award. Defining the pathways which determine drug efficacy, bio-availability and contribute to adverse drug interactions has been a major advance in medical science and has contributed significantly to the concepts of personalised and precision medicine.  I am proud to have been a part of this international research effort.

“The recognition of our research is a consequence of the exceptional contributions of many PhD students, postdoctoral scientists and research staff as well as our collaborators. We would not have been able to carry out this research without the support of our many funders and supporters, particularly Cancer Research UK, Ninewells Cancer Campaign, Medical Research Council, the European Union and the pharmaceutical industry.”

Professor Wolf holds a Chair in Molecular Pharmacology in the School of Medicine at Dundee.

He graduated from the University of Surrey in 1972 with a BSc Honours in Chemistry followed by a PhD in Biochemistry. Until recently, he held the position of Research Director at the University of Dundee Medical Research Institute and was Honorary Director at the Cancer Research UK Molecular Pharmacology Unit. In addition, he was a founder and the Scientific Director of CXR Biosciences (now Concept Life Sciences), based in Dundee.

Professor Wolf’s primary research interests are understanding the pathways which determine the sensitivity of cells to drugs, environmental agents and chemical toxins, particularly molecular and genetic studies on how chemical agents interact with cells, how this influences their therapeutic and toxicological properties and how genetic polymorphisms in the genes involved relate to disease susceptibility, adverse drug pharmacology and toxicology.

Specific current projects focus on preclinical drug development, the personalised treatment of cancer and the development of novel transgenic models to study drug pharmacology, disease etiology and the mechanisms that underlie the deleterious effects of environmental pollution.

Professor Wolf has published 533 papers in peer-reviewed scientific journals, which have been cited more than 28,000 times. He has been a member of numerous national and international committees and advisory panels in academia, government and industry.

Awarded an OBE in the 2010 New Year Honours List, Professor Wolf is a Fellow of the Royal Society of Edinburgh, the Academy of Medical Sciences, the Royal Society for the encouragement of Arts, Manufactures & Commerce and the British Toxicology Society. Professor Wolf is the recipient of the Gerhard Zbinden Award for contributions to the area of drug and chemical safety, the ISSX European Scientific Achievement Award (2005) , the Scottish Enterprise Award for Leading Individual Contribution to Life Sciences in Scotland and the John Barnes award from the British Society of Toxicology

Bestowed only once every three years, the R.T. Williams Distinguished Scientific Achievement Award is sponsored by Charles Crespi, Ph.D. and family and will be presented to Professor Wolf by Dr. Crespi at the 12th International ISSX Meeting July 28 – 31, 2019 in Portland, Oregon, USA.

The award is presented to an ISSX member from any region “who has made substantial and seminal scientific contributions to the field over a sustained period and celebrates the individual's scientific accomplishment. This award recognises the best in the field on international level”