Biomedical Cluster could add hundreds of millions to economy 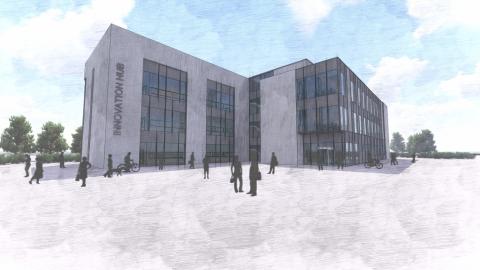 A project to grow the Tay Cities Biomedical cluster of world-class life sciences companies will generate hundreds of millions of pounds for the local economy and strengthen Scotland’s reputation as a centre of excellence, according to new economic analysis. The proposed Tay Cities Biomedical Cluster, led by the University of Dundee in partnership with NHS Tayside, has been earmarked for £25million in initial funding from the Scottish Government through the Tay Cities Deal. The project builds on Dundee’s world-renowned reputation for life sciences research, drug discovery and medical devices. Central to the project is an Innovation Hub close to the University’s School of Life Sciences at Dundee Technopole. This will house new high-growth Life Sciences companies, as well as providing high quality employment for the local workforce. In addition, a state of the art medical device research and development facility will be developed in the School of Medicine and NHS Tayside. A recently completed economic analysis forecasts that the local economy will benefit in excess of £175million with 250 new jobs by 2033. Professor Sir Mike Ferguson, Regius Professor of Life Sciences at the University and one of the leads for the Biomedical Cluster project, said, “We have a fantastic opportunity to build on the considerable strengths we have established in life sciences research and medical technology for the benefit of the Tay Cites Region. Professor Ferguson added, “We have already seen new companies established from our discoveries and expertise, notably Exscientia which has become a world leader in using artificial intelligence to design new medicines. The BioMedical Cluster project will catalyse a sustainable step change in that kind of innovation-led growth, accelerating company formation, company growth and delivering new jobs for the region and a sizeable economic boost.” Professor Graeme Houston, Professor of Clinical Imaging and Intervention, who leads the medical devices research and is Director of the Biomedical Cluster, said, “This investment offers excellent facilities for translation of research from scientists and the NHS clinicians to develop new treatments for patients.” About the Tay Cities Deal The Tay Cities Deal is a partnership between local, Scottish and UK governments and the private, academic and voluntary sectors which seeks to create a smarter and fairer Angus, Dundee, Fife and Perth & Kinross under the headings Inclusive Tay; Innovative Tay; International Tay; Connected Tay and An Empowered Tay. In total, the 25 projects submitted require investment of £700 million, of which £300 million over 10 to 15 years is being put in by the UK Government, Scottish Government and their agencies, subject to final approval of robust business cases. If every project and programme set out in the submission is funded and delivered, up to 6,000 job opportunities could be created across the tourism, food and drink, creative industries, eco innovation, digital, decommissioning, engineering, biomedical and health and care sectors. Local partners are continuing to work with the UK and Scottish Governments to deliver the Tay Cities Deal.