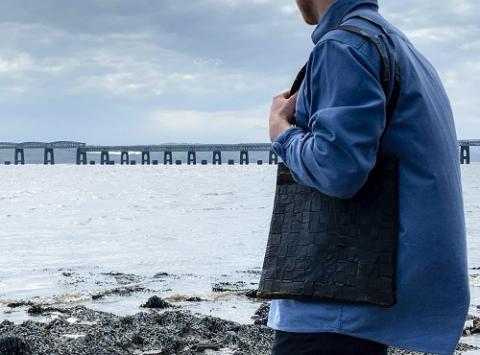 The impact of plastic pollution on our oceans is one of the biggest challenges facing the planet.

But one University of Dundee student is now letting the world’s waterbodies fight back by creating a sea-based sustainable material that could cut down man’s overuse of single-use plastics.

Michael Anderson braved the freezing waters of the Firth of Forth to harvest kelp that he has transformed into a substance capable of producing a range of everyday items.

The 21-year-old from Glasgow will be displaying some of his ‘Kelp-Weave’ creations at this year’s Duncan of Jordanstone School of Art & Design and Architecture Degree Show, which opens on Friday 17 May.

While keen to promote sustainable living, Michael admits that the development of his revolutionary material required some personal sacrifice.

“The whole experience was pretty gross,” he joked.

“The best local kelp is located in the East Neuk of Fife at low tide, so I had to get up at 4am and drive to Anstruther before stripping down and collecting this stuff in freezing cold water. This wasn’t helped by a sewage spill that I had to dodge, which meant travelling even further to get the quantities that I needed.

“When I brought it home I had to put it in preservative and the smell was really bad. It also produced a slime, which again was not particularly pleasant. But the worst thing of all was preparing to go into the water. Once you were in it was so cold that it didn’t really register, but the moments before going in were by far the worst.

“Once the material was ready it became fairly easy to work with, but getting to that stage took a lot of time. After all of the hard work it is a huge relief to finally be showing off my work at this year’s Degree Show.”

After collecting the seaweed, Michael treated it in a natural solution before drying and pressing his bounty in a custom-built press. After a period lasting up to several weeks, Michael found that the kelp had taken on a plastic-like quality and could be manipulated into several forms.

So far he has created a tote bag and wallet, though states that Kelp-Weave could easily be used to create other accessories or even outerwear. While his exhibit at this year’s Degree Show will showcase Kelp-Weave in its natural colour, Michael says that it could be dyed, although he is keen for his creation to remain environmentally friendly.

Duncan of Jordanstone College of Art & Design and Architecture Degree Show is always a highlight of the city’s cultural calendar, but with this year’s exhibition being the first to take place since the opening of V&A Dundee, the week of 18-26 May is set to be extra special.

Last year’s Degree Show attracted a record attendance of 16,000, generating in excess of £1.5 million for the local economy. Around 300 students will once again be showcasing visually stunning art and design that seeks to solve some of society’s biggest problems.

This year’s event runs from Friday 17 May to Saturday 26 May.