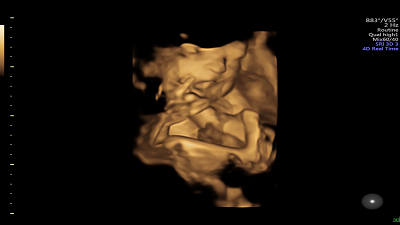 Babies in the womb will respond to interaction from its mother, including conversation and touching, a University of Dundee study has found.

Research conducted by the University’s Psychology department found that a baby in the womb will make more sucking motions when touched or spoken to, compared with those who are left alone.

The findings, published in the journal Infant Behavior and Development, also showed that babies would respond by opening their mouths when the mother spoke to them directly.

“There has always been a lot of questions about how communicative a baby in the womb can be,” said Dr Emese Nagy, an expert in fetal-neonatal psychology at Dundee who led the study.

“Many mothers feel that they can communicate with their babies in the womb by touching or talking to them, and this study has allowed mothers to see this before their very eyes.

“Our research allowed us to analyse frame-by-frame the response of the foetus to the interactions from outside and there is clear evidence to suggest that there was a response, even just small movements, to interactions from their mothers.”

Dr Nagy and her team wished to determine whether the ability and motivation to socially engage begins at birth or develops within the womb.

Interactive tasks required mothers to speak to or touch baby over a two-minute period. For non-interactive tasks, mothers were told that a laminated sheet would be shown for five seconds, and in this time they should talk or touch. The sign was then placed down for a further 10 seconds, where the mothers were to stop. These sequences also took place over a two-minute period.

Mouth opening significantly increased in the Interactive Talk condition at almost five seconds – more than double of all other factors assessed.

The study found that foetuses decreased levels of self-touching in response to the mother touching her bump, as if the foetuses were focusing on the mother’s touch instead of self-touch.

“This is the first study to compare interactive versus non-interactive engagement of the foetus,” added Dr Nagy.

“Though the numbers involved were small, it certainly indicates that interacting with an unborn baby is not just wishful thinking on the part of the mother. Further studies with a larger number of volunteers could help to establish just how commonplace this behaviour is.”

The study was carried out by a team, consisting of lead Emese Nagy, Paula Thompson medical sonographer, and psychology students Lauren Mayer and Heather Doughty.

The full study findings can be viewed online.