Look who’s coming to dinner: Student’s facial reconstruction is head of the table 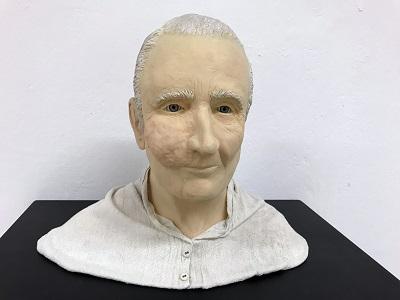 A facial reconstruction of a historic Fife man is joining a modern day family for dinner thanks to the skills of a University of Dundee student.

Rachel McGarvey, an MSc Forensic Art student at the University’s Duncan of Jordanstone College of Art & Design, has painstakingly recreated the visage of Archie Flockhart, a well-known character on the streets of 19th century Dunfermline.

With his skull having been preserved by the medical community following his death in 1877, Archie’s face has been recreated as part of this year’s Masters Show, one of Scotland’s most exciting displays of artistic talent.

With Rachel having painstakingly reproduced Archie’s features from wax while sitting at her family’s dining room table in Glasgow, she says that meal times have taken a surreal twist in recent weeks.

“Archie has definitely become a part of the family,” said Rachel.

“I’ve been working away on him for weeks but it was when I added his features that he really came to life. Sometimes we would talk about him over dinner, but when I added the ears we joked that we couldn’t do that anymore or he would hear us.

“I have to admit that even I didn’t expect him to look so realistic, but now that he’s complete it feels as though you can even chat to him.”

Born in 1801, Archie Flockhart was one of Dunfermline’s best known characters and was regularly seen attending sermons at churches or strolling through the local streets with his best friend, Bobby Gow. Living until the age of 75, an impressive achievement for the time, Archie endured a tough life and is described in the book Reminiscences of Dunfermline as a ‘poor half-witted creature’ who was routinely mocked and even physically assaulted by members of the public. He eventually ended up in Dunfermline Poorhouse having lived most of his life with his mother.

He was notable for a distinctive growth on the right side of his upper jaw, which is widely believed to be the reason that his skull was preserved for further research. Following his death, Archie’s skull was studied by phrenologists who were keen to learn more about the abnormality, with some believing that he may have lived with developmental disabilities.

As well as a wax reconstruction of his face, Rachel’s exhibit at Masters Show 2019 includes an ‘Archie’s Anthropology’ section, outlining some of the metric and morphological forensic anthropology methods carried out on the original skull.

“Archie was a big guy who seemed to have a personality to match,” added Rachel.

“It’s been a real pleasure working on this reconstruction and I can’t wait to see people’s reactions to Archie when they see him at the show.”

The Duncan of Jordanstone College of Art & Design Masters Show 2019 opens to the public on Friday 16 August and continues until Sunday 25 August. Entry is free and more information can be found online.