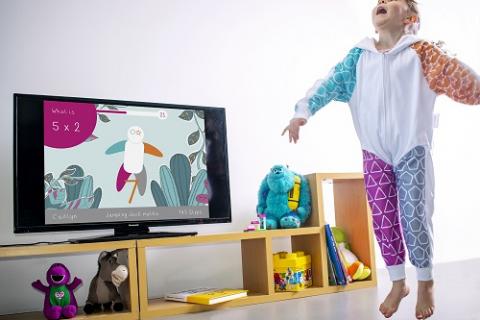 Hours of inactivity in front of a screen might be a thing of the past, thanks to a new playsuit developed by a University of Dundee student.

Digital Interaction Design student Jenna Maudlin says that her interactive playsuit which allows children to control a video game with their movement will satisfy parents concerned with their offspring’s screen time.

Jenna, who believes her prototype is the world’s first interactive playsuit developed for children, will be reveal her final-year to the public this week as it goes on display at Duncan of Jordanstone College of Art and Design and Architecture Degree Show.

The suit and accompanying video game ‘play.world’ were designed by the 34 year-old from Lowestoft to encourage children to explore and complete physical, creative and cognitive mini-games, using the movement of their body to play.

The ‘play.suit’ is completely hands and face-free, allowing the child in charge to control their movements and also be able to see and hear their family – an aspect which Jenna says is crucial to encourage active-family time inside.

For added peace of mind, she has also designed an accompanying app for parents to be able to track progress, set motivational goals and even send rewards to their children in-game.

“It’s undeniable that screens have taken over our lives and the next generation will go through their lives with screens being a major part of it, so I wanted to encourage active screen time, with the hope that it also translates into other aspects of their lives.

“Many of the parents I surveyed hinted at feeling guilty at using screen time as a way to subdue their child and to keep them occupied whilst they got on with daily tasks or chores. This is ultimately one of the biggest problems I wanted to solve as well as keeping kids on their feet.

“I adopted the notions that Lego and PlayScotland recommend to create mini games that encourage physical, emotional, creative and cognitive types of learning, as well as teaching kids about the world around them as a way to reassure parents through the companion app of their child’s progress and development in these areas.”

Developed with 3-8 year-olds in mind, Jenna was first inspired to create the suit after living with friends who have a 5-year-old daughter, following a marathon-effort to run from London to Rome in her summer before final year.

“They kindly took me for six weeks after I came back to uni with nowhere to live after a summer internship in Edinburgh and my 1200 mile run attempt. It was really useful to my research and being able to understand my users a little better. Their 5-year-old daughter tested my ‘play.suit’ and her mum’s insights into parenting and the app were invaluable.

“I hope to continue to develop the suit and the game so they are fully immersive and allow parents the options to add new sections as their child progresses through the levels.”

Duncan of Jordanstone College of Art & Design is one of the leading art and design schools in the UK, with many of its students forging careers as world-leading artists, animators, designers and makers.

The annual Degree Show attracts more than 15,000 visitors, with this year’s event running from Friday 17 May to Saturday 26 May.