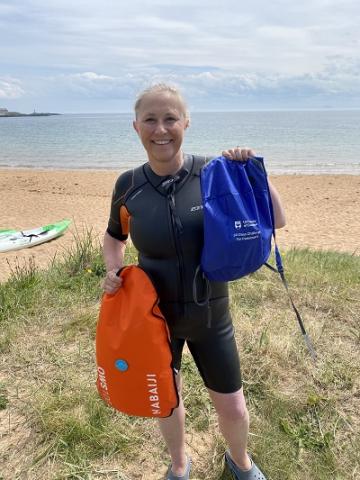 A University of Dundee campaign to fund research into Parkinson’s disease has smashed through the £20,000 barrier – just days after launching.

Dozens of staff and students are walking, running, cycling, baking or hula hooping every day throughout June as part of the University’s 30 Days Challenge for Parkinson’s.

One of those taking part in the fundraising initiative is Ellenore Hobkirk, the University’s Head of Development and Alumni Relations, who is swimming at least one kilometre each morning in the chilly waters of the Firth of Forth, off the coast of Elie.

Her efforts have already raised more than £2,000 and she said that as well as witnessing the world-leading research being carried out by her University colleagues, she was personally motivated to take part in the campaign.

“I have witnessed my friend receive the life-changing diagnosis of Parkinson’s and then have to adapt to the challenges she had to face as a result,” she said.

“As the news has spread about my challenge, two friends have told me that they are living with Parkinson’s and despair at the lack of effective treatments. It really is time to make a difference and research is the only route to a better quality of life for the increasing number of people facing the life-limiting effects of Parkinson’s.

“I have had fabulous support from the local Elie swimming groups, the Blue Tits and Rubbers Duckers, who have given generously and ensured I am never swimming alone.”

Parkinson’s disease is a disabling neurodegenerative illness which has no cure and no way of being slowed down. The most successful drug to manage Parkinson’s – Levodopa - was developed 60 years ago, but since then there has been no major breakthrough in the management or treatment of the disease.

Every week, 30 people in Scotland are diagnosed with Parkinson’s, which is why the University has launched it’s 30 Days Challenge. Taking place from June 1, people have been asked to do something tiring, inspiring, relaxing, funny, or unique on each of the 30 days in June, to raise at least £120 for the Dundee Parkinson’s Research Campaign.

To learn more about the 30 Days Challenge for Parkinson’s, please visit the dedicated webpage. Anybody wishing to donate, can do so via the event’s JustGiving page.